The workshop was attended by about 200 participants who took active participation in learning the new technology and contributed in updating their local knowledge to Google Maps. This workshop was organized jointly by the students of MIMS, Manipur University and ICM, Imphal. It was the follow up of Google Mapmaker, Manipur mapping event which was organized jointly by the Bioinformatics Infrastructure Facility, Life Sciences, Department Manipur University and MIMS, M.U which was held on 22nd Oct., 2012.

In his address as Chief Guest, Prof. N. Irabanta Singh, Dean, School of life sciences, Manipur University quoted important points from the article “Discovery – New Routs – mapmaking for the people by the people” published in the Time of India (Hyderbad) 10th Nov., 2012 issue by Javad Anwar. Prof. Singh also thanks MIMS students under the guidance of Dr. Jobonkumar Sharma for organizing such an event.

He also remarked that if proper guidance and leadership were provided to the students , they can achieve success in any initiative.Such an event is a perfect example of co-ordination between motivated students studying in Manipur and nonresident Manipuri’s living in different cities across India and abroad to bring about some positive change and for socio economic development of Manipur. Prof. Singh appealed to the participants that in the age of information technology you are to think globally and act locally for your motherland.

In his speech as Guest of honor, Dr. L. Jibonkumar Sharma, Director (i/c), Manipur Institute of Management Studies, M.U. emphasized the role of Information Technology and computer application in the present day Technology world. Dr. Sharma appreciated the initiative taken by the members Manipuri Diaspora for taking lead role for uploading Google Map Making and Manipur Map which was volunteered by his students from MIMS. He further acknowledged the contribution of KEN, NAMA and EMA for their interest in organizing such an event.

In his presidential address, Dr. Kh. Somorandro Singh Director, ICM, Imphal expresses his appreciation to the student of MIMS, M.U. for organizing such an event. He also appealed to his faculty members to make good usage of the technology for its probable application in the Co-operative management. The inaugural function was closed with a vote thank from the ICM faculty member. 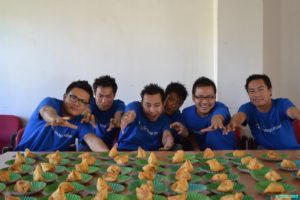