In his address the Chief Guest of the function Prof. N.Irabanta Singh emphasized on developing a culture of Public-private partnership in the university and gave examples of universities in US and UK which gets major portion of its funding from private firms. He also motivated the delegates on practical application of ideas which will benefit the community and not just mug-up theoretical knowledge. He gave his practical experience of travelling abroad and seeing application of technologies like GPS (Global positioning system) and its applications for finding directions etc. He also emphasized that mapping Manipur event will boost tourism in the state and expressed his desire for the Government of Manipur to support such initiative which are promoted by Manipuri diaspora around the globe.

Dr. L. Jibon Kumar Sharma, Director In-charge, Manipur Institute of Management Studies, Manipur University emphasized the idea of  Volunteerism shown by the Manipur Diaspora around the globe for organizing such an event using their own personal expenses. He appreciated the various voluntary mentorship programs initiated by Manipuri diaspora for the benefit of the students of the university. He expressed his desire for a coordinated effort between local government and Manipur diaspora to bring about positive changes for socio-economic development of the state.

In his presidential speech Prof. GKN Chhetry, Head department of Life Sciences narrated his practical experience on the use of Map enabled tools such as GPS in finding directions or places when he went to USA recently.

The event was organized in two separate sessions of hands-on training and was successfully conducted by Abhinav Sarawgi and Aeroshil Nameirakpam. The Google Mapmaker Manipur Mapping event had some objective which were to empower local users to add or edit local information on google maps and add comprehensive local data about road, campuses, parks, businesses,hospitals, communities and many more and turn Manipur to one of most Mapped State in Entire North East India and make it visible online and universally accessible , and to help map of remote khuls in hill areas and map local leiraks and leikais which could never have an opportunity to be uploaded to google maps.

To enable user upload data once approved, make its way to Google Maps, Google Earth, Google Maps for Mobile and pave the way for promoting commerce and Tourism in the state by mapping tourist spots. For example, creating walking trails for koubru and Baruni ching, etc. Aiding investment and planning for NGOs and other Government organizations which will directly boost tourism and socio-economic development of the region.

To learn about Map Maker which has collaborative ongoing projects with United Nations bodies like UNOSAT (Unitar operational satellite application program), UNECA (United Nation economic commission of Africa) to provide imagery analysis and satellite solutions to relief and development organizations in Africa and which is helping make a difference in providing humanitarian relief, strategic territorial and development planning to remote inaccessible areas. We can initiate such projects in Manipur too.

Google Mapmaker was effectively used during disaster monitoring and management in Chile earthquake, Pakistan floods, Horn of Africa Famine, Sudan Crisis and Huza river landslide and many more. To acquire acquiring knowledge of such tools which will help us in case of any disaster in Manipur to directly monitor and help in damage control measures and disaster management.

To raise awareness among the youths of Manipur to become more tech savvy. Be aware of the latest technologies and effectively utilize it and apply it to benefit the local communities and local areas and create a platform so that students who are willing to take up future projects have a point of contact and opportunity in the future.

The response from the participants were overwhelming and Google representative Shri Abhinav Sawargi expressed his desire to organize many more events in the future in Manipur and mentioned Manipur can become a model example for other states of the North East India to follow. By and large the event was successfully organized with the interaction of the participants who expressed their desire for the Government of Manipur to promote and encourage initiative similar to the one organized annually by the Ministry of External Affairs, Govt. of India like the PBD (Pravashi Bharatya Divas).

Such an initiative will create a platform for overseas Manipuri Diaspora to learn about investment and collaborative opportunities in various fields such as IT-software and hardware, Healthcare, FMCG-Food & Beverage, agro-based, Business and community engagement, Academic education, tourism and Hospitality. 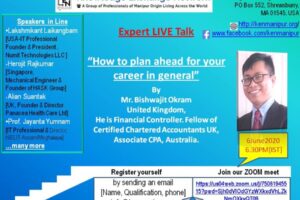