The Knowledge Exchange Network, KEN, has been founded, and is open to all non resident Manipuri professionals and business people across the world.

The Knowledge Exchange Network was conceived and initiated in the year 2011 by three non resident Manipuris, with the main objective of creating employment, and enhancing economic progress in Manipur. It was innaugurated on Saturday 26 July 2014 in Boston, Massachusetts, where Dr. Irengbam Mohendra Singh, Ajit Thokchom, Lakshmikant Laikangbam and Kelvin Ashem were elected President, Vice President, General Secretary and Finance Secretary respectively. 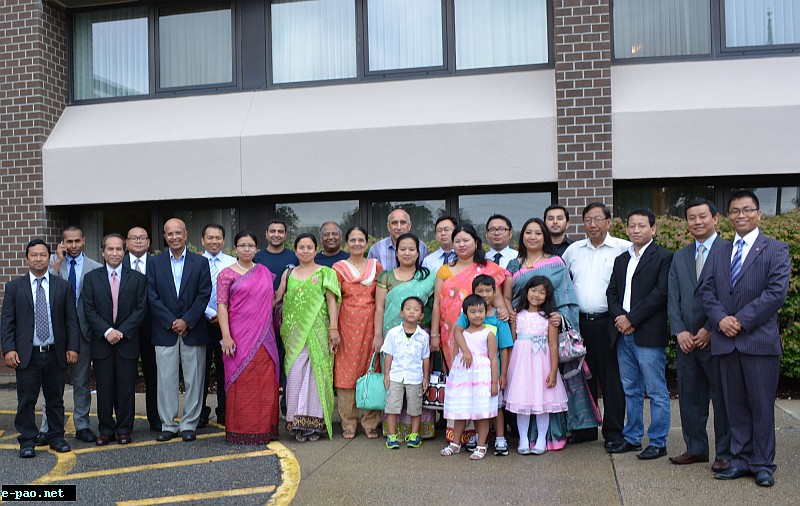 The following day, Sunday 27 July, at the Hilton Hotel, Boston, local and overseas dignitaries, international corporate houses and social organisations, attended a video-linked convention with special focus on Information Technology (IT) and Tourism.

From Imphal the keynote address was given by the Hon’ble Chief Minister of Manipur, Shri O. Ibobi Singh through an online video link when he welcomed and praised the endeavour of this newly formed organisation. He also outlined various governmental programmes which Manipur Government has been pursuing and gave a directive of the aims of the government for which he sought active contributions from Manipuri NRIs towards building a strong and well-developed Manipur.

The newly elected President of KEN, Dr. Irengbam Mohendra expressed his confidence that KEN will be able to do just that.

During the conference, through audio-video link, Mr. Rajesh Kumar, the principal secretary for information technology, Manipur government, encouraged and motivated the gathering at Boston by giving an elucid power point presentation on the present available opportunities. He also enumerated the various future plans of the state-related IT in relevant fields and invited Manipuri diasporas to contribute in Manipur’s developments with their experience and innovative skills.

Dr. Dhabali, President of Manipur Tourism Forum, MTF, also made a power point presentation on lucrative tourism opportunities in Manipur and the various plans the Tourism Forum has for making tourism in Manipur attractive.

The historical event in Boston was also attended by NRIs from other Indian communities from various professional backgrounds. In Imphal, the occasion was also attended by Deputy CM Gaikhangam, M. Oken Singh – the Education Minister, Irengbam Hemochandra Singh, the PHED Minister, O. Nabakishore Singh – Additional Chief Secretary and other civil servants. Members of the media from ISTV, and O Surja Singh – founder of Manipur Green Army Organisation, were also present.

Finally, in closing the convention, Mr. Dhrita Kumar from Boston, Senior Advisor of KEN gave the Vote of Thanks.

Eligibility: Young artists from any genre of Indian Classical Music[...]